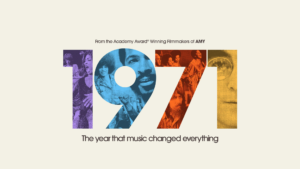 1971: The Year That Music Changed Everything

We are delighted to announce that 1971: The Year That Music Changed Everything, will be released on Apple TV+ on May 21st, 2021.

The series is based on the book 1971 – Never A Dull Moment: Rock’s Golden Year by David Hepworth.

In a landmark documentary series from Academy Award winning documentary makers James Gay-Rees and Asif Kapadia, BBC One will examine one of the most famous cases of 20th century Britain, the murder of 18 year old black student, Stephen Lawrence by a group of white teenage boys. What followed was one of the longest, most complex and mishandled murder investigations in Metropolitan Police history allowing the suspected killers to evade justice for almost 20 years.

Baroness Lawrence said: “My son Stephen was brutally taken from my family nearly 25 years ago. This documentary will be the definitive narrative of the events of the past quarter of a century – a full, frank and comprehensive drawing together of the story that has shaped the lives of both my family and myself since that fateful April night. But in addition to that, it is my story – that of a parent’s loss of a child, a sibling taken in unimaginable circumstances from his brother and sister and our family’s fight for justice against the odds and the system that we always believed was there to help and protect us all without the evil of racism. With every story comes an end and this final BBC documentary in conjunction with the On The Corner team will be my final public word on the events. Whilst Stephen will always travel with us, a new journey is ahead for us all…”

What made Stephen’s case so different is the extraordinary determination and absolute refusal of Stephen’s parents, Doreen and Neville Lawrence, to accept the establishment’s decision. On the 25th anniversary of Stephen’s murder, with unprecedented access, this eye-opening series will explore the force of their indignation. Still being felt in Westminster to this day, the laws on double jeopardy were partially repealed and the Macpherson Report called it ‘one of the most important moments in the modern history of criminal justice in Britain’. The Home Secretary at the time, Jack Straw, called the inquiry “the single most important decision I made as Home Secretary”. For the first time BBC One will be looking at every aspect of the case including the subsequent inquiries, pulling it into one complete timeline and asking the same relevant questions of a contemporary Britain.

PRESS for STEPHEN: THE MURDER THAT CHANGED A NATION
BBC One, 18th April 2018

★★★★★ THE EVENING STANDARD | David Sexton
“Tragic, visceral and shocking”
“Essential viewing this week — and it might yet become part of how this unending story develops further.”